The Rosary is a popular Catholic devotion that developed over time.  Many of the faithful enjoy saying the Rosary regularly, but often are drawn to this devotion more frequently during Lent as an opportunity of prayer.

Pinpointing the origin of the Rosary is not easy.  The familiar legend that St. Dominic (1170-1221) received the Rosary from Mary is difficult to substantiate.  Most historians believe that the Rosary developed slowly during a time-span stretching possibly from the 1100s-1569, when Pope Pius V officially approved the devotion.  It is believed that the laity had a desire to have a form of memorized prayer similar to that practiced by monks.  Because of its repetitive nature, the Rosary was embraced—especially for those unable to read. The use of beads during prayer is an ancient practice helping to focus on the repetitive nature of a prayer and also helping to keep track of the mysteries of the life of Christ.  The Rosary took its present form between the 14th and 15th centuries. 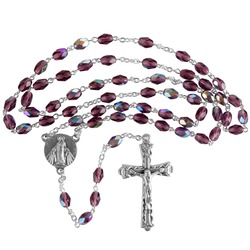 The Rosary is meant to be a prayer that leads us to Christ and into union with God.  The mysteries of the Rosary are centered on events in Christ’s life.  In repeating these mysteries, we are reliving the life of Christ.