You will not find the “Stations of the Cross” discussed or listed in the Bible as we know them today.  They are based on the stories of Christ’s arrest, trial, and death.

Jesus’ followers told the story of his passion, death, and resurrection from the earliest of days.  When pilgrims came to Jerusalem, they were anxious to see the sites where Jesus lived, ministered, and died.  Soon, however, people moved around so much that they were unable to visit these holy sites.  By the 1500s, people all over the world began to create replicas of the places along the route in Jerusalem.  Eventually these shrines became the 14 stations we know and celebrate today.  Like our parish, many Catholic churches have the “Stations of the Cross” surrounding the walls of their sanctuaries.  There are many written prayers and meditations associated with the Stations that the faithful pray during the season of Lent. 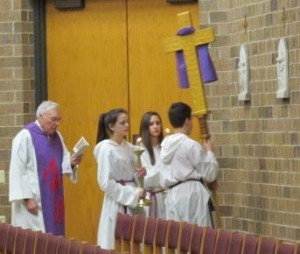 The word station comes from the Latin word that means to stand.  We are walking from Christ’s trial to His crucifixion at Calvary.  We stop at each station to commemorate various events that took place along the way.  The act of walking and praying becomes a devotional act, because we are walking with Jesus as he walks to Calvary.

Brought to you by the Worship Committee & Gloria Nolan, Pastoral Minister.  Source: www.Catholiceducation.org