“God’s might to uphold me,
God’s wisdom to guide me,
God’s eye to look upon me,
God’s shield to protect me,
God’s host to save me.”
~From St Patrick’s Breastplate

Once a year, we celebrate St. Patrick’s Day with song, dance and traditional Irish food. The life of St. Patrick is the reason for this celebration which is a Christian holiday in Ireland but a mostly secular celebration of Irish culture and traditions in other places. 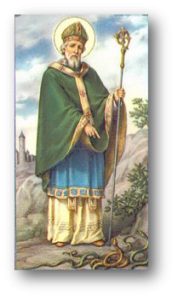 Here are some interesting facts about this saint from a biography written about him by William Thomas.

St. Patrick is Ireland’s patron saint and was known for spreading Christianity throughout Ireland as a 5th century missionary.  The tradition goes that Patrick, born in Britain, in 386 A.D., was captured by Irish pirates and sold into slavery. His job was to tend sheep and he lived a solitary life for the six years of his captivity. Some sources list his given name as Maewyn Succat. His father was a deacon from a Roman family, but Patrick was not raised with an emphasis on religion or education.

Patrick became devoted to Christianity during his captivity and prayed constantly. He escaped enslavement and reunited with his family. He studied in France and entered the priesthood.

His vision since his captivity was to convert pagan Ireland to Christianity. After being ordained a Bishop, he was sent as a missionary to Ireland. Along with other missionaries, he preached and performed baptisms throughout the country. Ireland had many nature-oriented rituals and spiritual practices, so Patrick incorporated these into church practices. Patrick founded monasteries and organized Ireland into dioceses and may have designed the Celtic cross which combined a native sun-worshiping symbol with that of the Christian cross. 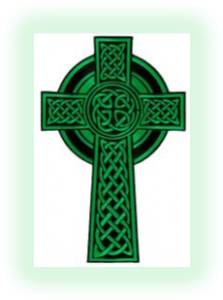 Patrick was the great evangelizer and is considered Co-Patron of Europe, along with Saint Benedict, Saint Theresa Benedicta of the Holy Cross (Edith Stein) and Saint Bridget of Sweden.

As you celebrate St. Patrick’s Day from year to year, remember St. Patrick’s life and works and the wonderful gift of his faith in Christ that he passed on to us all!

Bail O’ Dhia ort, (The blessing of God on you)