Just for kicks, I recently compiled a list of things that were considered unsavory, taboo or even immoral when I was a kid but now, just thirty years later, are often considered mainstream in western culture. My, how our world has changed. I’ll leave it for you to decide whether each of these items has had a positive, negative or neutral effect on our culture.

Here’s the list of things we were taught are “unacceptable” but now are often a common part of our landscape:

▪ Wearing jeans and/or t-shirts to church

▪ Leaving a baseball cap on your head in a restaurant

▪ Living together (which we called “shacking up”)

▪ Vulgar language on television or in public

▪ Leaving food on your plate

▪ Entering a theater after the show started

I’m sure you can add to this list.  At first I felt a bit shocked at how easily simple inconsequential things like wearing jeans to church interlaced with much larger issues such as sex and guns. There is obviously no cause/effect relationship in play, but it does paint a picture of sorts, doesn’t it?  Have we become socially confused, no longer able to distinguish between trivial issues and major concerns?

Generally speaking, many of the items on my list either contribute to or resonate from a breakdown in the level of respect we have for each other and for ourselves. In fact, we should probably add “behave disrespectfully” to the list.  Recently, this deterioration of respect for ourselves and for one another seems to have been oddly catalyzed and re-labeled with the term “politically correct.” Thirty years ago, no one ever spoke of being “politically correct” because we didn’t have to. We refrained from saying harsh things about other people because doing so was simply offensive. 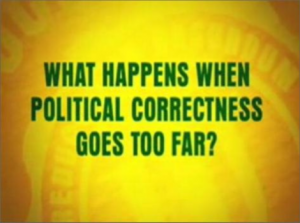 In the house where I grew up, we were taught to be respectful of others, all others.  So we didn’t refer to people in racial terms, make comments about their physical appearance, or insult someone else’s religion.  We practiced the idea that if you can’t say something nice, don’t say anything at all.  Forty years later (and yes, I know I’m sounding old to everyone born after 1980), one almost gets the sense that being rude and insulting is viewed in some circles as bold courage, or even praised as “telling it like it is.”

There are times when it feels like we have shelved the concept of respectfulness and replaced it with this strange idea of political correctness. In doing so, are we trivializing the idea of respecting and valuing all God’s people? Whenever someone says, “I’m sick of having to be politically correct” what inevitably follows is self-assumed permission to disparage a whole category of people. By rejecting the idea called “political correctness”, we have found an ironically politically correct way to be disrespectful and offensive.

It was, indeed, very politically incorrect for Jesus to dine with tax collectors, advocate for Samaritans, heal people on the Sabbath, forgive sinners, and speak with the woman at the well. He never worried about being politically correct because he acted and spoke with respect and reverence for all others all the time. As disciples, shouldn’t we do the same?