The last thing the Acts of the Apostles tells us about St. Paul is that after his arrest and appeal to Rome, he began his journey to that city.  It is not surprising then that multiple legends arose over the first several centuries describing his last days before martyrdom. Our teachers brought us to multiple sites mostly related to St. Paul, his imprisonment, and death.

The first order of the day, however, was a ride to the Domitillan catacombs.  This is a huge underground cemetery outside Rome. According to Roman custom, all people who died had to be buried no matter how their death was caused.   Whereas the important Roman citizens had their tombs identified, the ordinary people and especially the poor were buried anonymously.  Christians, however, saw the value of every human being and so all Christians who died under any circumstance had their graves identified with their name. Upon entering the catacombs we went down a set of steps to a huge underground church. I vested there for Mass but soon our group of 20 were led further into the catacombs until we reached a small cave-like room with an altar.  It was the feast of the Nativity of St. John the Baptist this day.  What an appropriate way to celebrate the deaths of so many Christians who are buried in the catacombs – – John being one of the first martyrs for Christ. 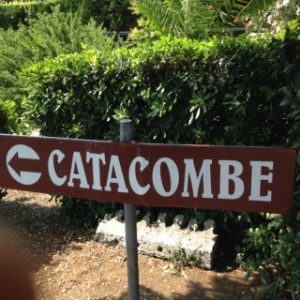 After Mass we drove to the Appian Way. This ancient Roman road is still in use, much like our biking and walking trails. Incredible to think that Paul, once arriving at the port city of Ostia, would have walked this same route to his Roman confinement.  Even though it was more than 90 degrees, we took a 30-minute walk in the footsteps of Paul. 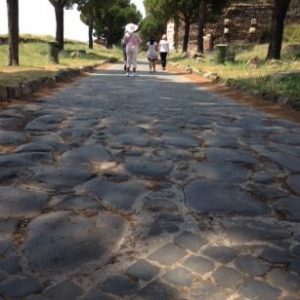 Following that we drove to Tre Fontaine, site of a Benedictine monastery where legend has it that when Paul was beheaded, his head bounced three times with a spring of water bursting forth at each spot.  Obviously, it was just legend but it was still a very prayerful place.

Then came the highlight of the day: arrival at the Basilica of Saint Paul Outside the Walls. 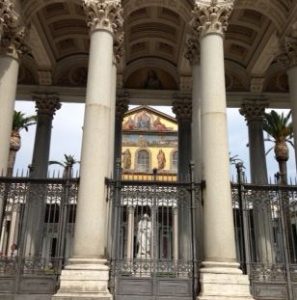 This is the 4th Church in Rome that is designated as a place to walk through the Holy Doors – – and to think that I visited all four of those churches. 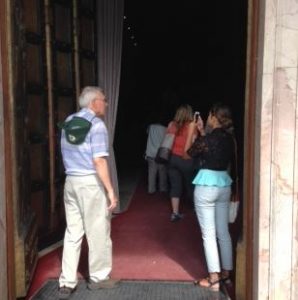 This large Basilica is an awesome sight.  Much simpler than St. Peter’s, it also attracts pilgrims who wish to see the place of martyrdom of the 2nd to the great apostles.  Like St. Peter’s, the church has no pews but is rather an open gathering space for Christians to assemble and worship. 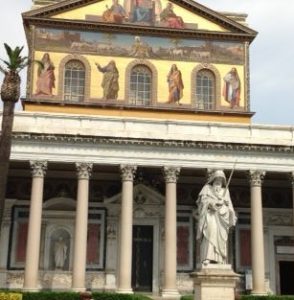 Central to the church is a display case holding the nine links of the chains that are said to have bound St. Paul while in prison.  Below the altar is a shrine which tradition says is where St. Paul’s bones were buried after he was beheaded.  Similar to findings at St. Peter’s, analysis of the bones found under the altar go back to the 1st century.  A good place to pray and reflect. 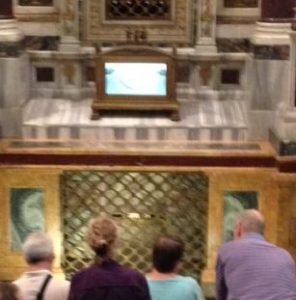 The windows of the church, rather than of stain glass, are made of alabaster sheets and let light through their opaque material. 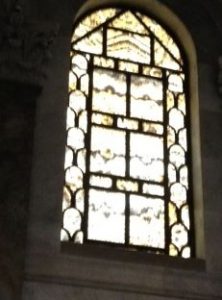 Around the upper walls throughout the church are mosaics of every Pope from the time of St. Peter all the way up to our current beloved Pope Francis. His mosaic is spotlighted and stands out as a witness to his present servant leadership. 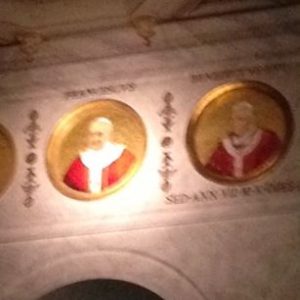 And thus our formal study time in Rome ended. In the evening, we walked to an outdoor restaurant where we feasted on the finest Italian foods before saying goodbye to one another.