Brothers and Sisters in Christ, 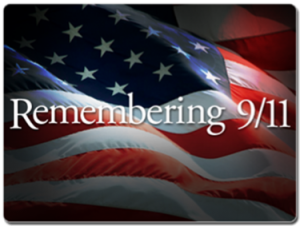 Since this year marks the 15th anniversary of “9/11”, it’s interesting to me that virtually all students in our primary and secondary schools have no recollection of that dark day.  For these students, their awareness, knowledge, and opinions about 9/11 will most likely come from history books, TV, or YouTube.  In addition to remembering all those whose lives were ended or affected as the result of the events of 9/11, I am drawn to re-read the stories of ordinary men and women who took heroic actions on that day.

Most 9/11 coverage seems to focus on two jets that crashed into the World Trade Centers in New York City, and the 3rd jet that crashed into the Pentagon in Washington D.C.  I’m drawn to the events that unfolded on the 4th jet, United Airlines Flight 93.  Thanks to the heroic action of several people, that jet plowed into an empty field in Shanksville, PA. Although Flight 93’s intended target is not known, it is believed that the hijackers were targeting the White House, the U.S. Capitol, or a nuclear power plant.

One of the passengers, Thomas Burnett Jr., told his wife over the phone, “I know we’re all going to die. There’s three of us who are going to do something about it. I love you, honey.” Another passenger, Todd Beamer, was heard over an open line saying, “Are you guys ready? Let’s roll.”  Sandy Bradshaw, a flight attendant, called her husband and explained that she had slipped into a galley and was filling pitchers with boiling water.  Her last words to him were: “Everyone’s running to first class. I’ve got to go. Bye.”

We’re all called to heroic action of goodness to overcome evil.  I’ll close with two quotes we can look to when we come face-to-face with evil:

“Do not be conquered by evil but conquer evil with good.”  St. Paul to the Romans 12:21

“No kind action ever stops with itself. One kind action leads to another. Good example is followed. A single act of kindness throws out roots in all directions, and the roots spring up and make new trees. The greatest work that kindness does to others is that it makes them kind themselves.”  Amelia Earhart

Many blessings to you and your family.