I had settled into my seat by the window, grateful the aisle and center seats were open. It wasn’t a full flight, so I had room to spread out and relax.

I closed my eyes, hoping to catch a little sleep. My bliss, however, was short lived.

The pilot’s voice came over the comm, “So, uhm, here’s the situation, folks – we had a little error message pop up in the cockpit here.”

He continued, “We’re not really sure what it means, so, uhmmmm… we’re going to go ahead and give it a hard shutdown and then reboot just like you would with your own laptop.”

“That’s it?” I thought. “You’re going to just reboot the airplane like it’s a video game?!” 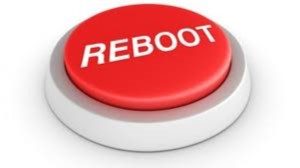 Wouldn’t it be great to be able to simply reboot life like that once in a while? Whenever we see an error message pop up in our lives, we could engage a hard shutdown and reboot. I think I’d like that. I’m certain Michelle would like to reboot me sometimes.

Together, Christmas and New Year’s provide us with an opportunity for a spiritual and chronological reboot. Of course, even as we make resolutions and commitments to ourselves, it’s difficult to think of these as a hard restart because we haven’t actually gone through the hard shutdown part. We carry all the same anxieties, stresses, prejudices, and other baggage forward. Rather than reboot and live as the best version – the Christlike version – of ourselves, we settle for a slightly modified version. Most of our resolutions are actually just attempts to cope with or cover up all the old junk rather than truly engage renewal.

In reference to my own life, I am guilty of slapping new paint over rotted boards, and then standing back and nodding with self-approval, “There, much better.” It gets me through the day but does very little to get me to a better place. Sure, I might have dropped a few pounds, but am I living and loving as the healthiest, happiest version of me?

Nearly all of us enjoy playing the lottery fantasy game: what would you do if you won the lottery? Another popular version of the same game is mortality awareness: what would you do if you had only one month to live? If you listen to the answers most of us give, you’ll notice a subtle difference. In response to winning the lottery, we fantasize about changing things outside of ourselves such as our jobs or our homes. Many of us imagine using the windfall to put something good in the world and to fund charity work. Mostly though, we think about changing something that’s not us. In response to the mortality question, however, we are decisively more self-reflective. We talk about worrying less and loving more. We actually think in terms of a total reboot for the final stretch and living our last month the way we wished we would have lived our entire lives.

What would happen if we used this season for a reboot, if we resolve to live as though right now is the first, last, and only year we will ever live? What baggage, dead weight, and negativity would we set down and walk away from? How would we love more fully and generously than we do now? How free would we feel?

“As we approached the security desk, I made sure we were walking side-by-side, actively involved in conversation, so it would be obvious to the security personnel that we were friends, that we had entered the building together. I wanted to give them every reason to treat us alike and eliminate every excuse not to,” said Deacon Steve Meyer.

To find out what happens, click the link to listen to Deacon Steve Meyer’s 5 ½ minute video.

Share on FacebookShare on TwitterShare on Linked InShare by Email