Over the centuries, the Church often interpreted passages like this in the scriptures as rationale for persecution of the Jews. It was, therefore, not surprising that our visit to the Jewish synagogue in Rome was an enlightening experience.  Our guide showed us the small ghetto in which the Jews were forced to live. She told of the very difficult existence of the Jewish community over the centuries. Saint Pope John Paul II’s visit to the synagogue of Rome in 1986 finally turned the page of the Church’s attitude toward our “brethren in the faith.” Since then both Pope Benedict XVI and Pope Francis have made historic visits to this synagogue.  You could tell how much those visits meant to our guide.  She was part of the preparation team for the visit of Pope Francis. 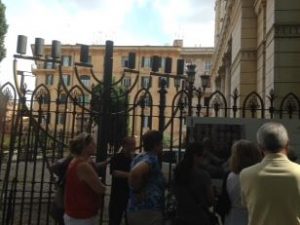 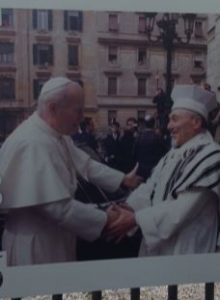 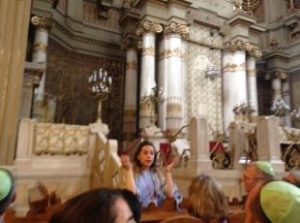 On the same day, we also visited two churches directly related to the life of Saints Peter and Paul – churches that tourists rarely, if ever, visit.  Unfortunately, both were locked but we still got a sense of the history.  The first was San Paolo alla Regola.  It is the traditional site where St. Paul lived while under house arrest after he arrived in Rome.  In that area of Rome, the Guild of Tanners were headquartered; Paul, a tent maker, felt very comfortable being there.  From this place he met with many people, preached to them, and wrote letters to other Christian churches he had formed earlier in his ministry. 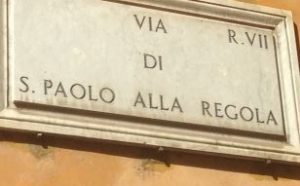 We then climbed up one of the hills of Rome (very steep and filled with curves) to San Pietro in Montorio.  It has the reputation of being one of the possible spots where Saint Peter was crucified. (Two days before we had visited the crypt of Saint Peter which claims the same martyrdom!) The reputation of the story of this place for martyrdom was especially popular in the 14th through 17th centuries.  Because it is so high up and overlooks the city, one can understand how tempting this place is for this claim to grow. 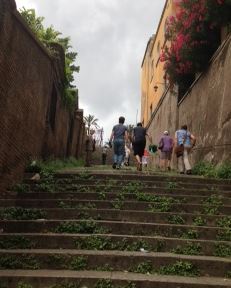 Mid-afternoon we stopped at an authentic Jewish restaurant and had a terrific lunch of artichokes, potatoes, and lamb. Magnifico!  And so after another long day of site study, we returned to the hotel for the evening.