Happy Labor Day and weekend to each of you!  Often this weekend is looked at as a final summer hurrah:  the last trip to the lake, the final family picnic, a quick vacation before the busy routine of the year falls back into place.  Labor Day we know is so much more.  It came into being to celebrate workers and their contributions to society.  Its history is an interesting one.

Labor Day originated in the late 1800s at the height of the Industrial Revolution in the United States.  During this time, the average American worked 12-hour days and seven-day weeks in order to eke out a basic living.  In some states, children as young as 5 or 6 labored in mills, factories and mines across the country, earning almost nothing.  People of all ages, particularly the very poor and immigrants, often faced extremely unsafe working conditions.  Labor unions appeared and organized rallies protesting these poor conditions and hours. 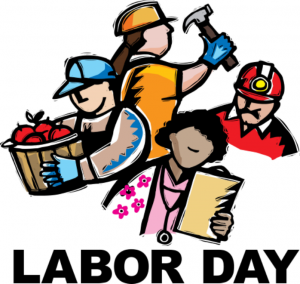 On September 5, 1882, 10,000 workers took unpaid time off to march from City Hall to Union Square in New York City, holding the first Labor Day parade in U.S. history.  The idea of a “workingmen’s holiday,” celebrated on the first Monday in September caught on, and many states passed legislation recognizing it.  In 1894, Congress recognized it after the American Railroad Union called for a boycott of all Pullman railway cars, crippling railroad traffic nationwide.  It unfortunately led to violent protests and the loss of life.  In the midst of this unrest, and to repair the relationship with workers, Congress passed an act making Labor Day a legal holiday, officially placing it on the first Monday of September.

Not all of us can rest from our labors on this day, but hopefully each of us can give thanks for all who labor.  Let us pray for those who are unemployed, and for the many throughout our world who still toil in unsafe and unjust conditions.  Above all, let us use at least a part of this weekend as a Sabbath rest, to reflect upon and be grateful for the work we do or have done, recognizing the ways in which we are using the gifts God has given us for the sake of others.