The first time someone told me I was destined for hell – I mean, actually declaring it as a forgone conclusion, not ruefully suggesting I should take the trip – I was taken aback by the presumptuousness. How dare he, I thought, declare himself the arbiter of eternal justice! So I pushed him on the point. His reasoning had nothing to do with justice; it was simple math.

He pointed to the Bible – Revelation, Chapter 7, Verses 2-4 – only one hundred forty-four thousand shall receive the seal on their foreheads as the servants of our God. 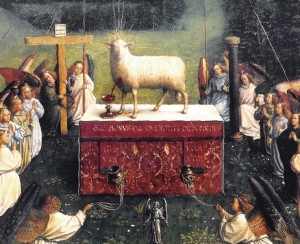 One hundred forty-four thousand. That’s it. Considering that over 100 billion people have lived on earth so far, he reckoned this select group had already been chosen. Even if a few spots remained, he argued, what chance did I have at scoring one of them? Really, who did I think I was?

If you’ve ever found yourself cornered by a fundamentalist Christian, you’ve probably had this magic number (144,000) thrown in your face as well. There won’t be a single Catholic among them, I was told.

When we read scriptures literally, we miss the true spiritual richness of the message. Let’s take a look. For the ancient Hebrews, numbers were symbolic; they represented concepts more often than quantities. The number twelve, specifically, was considered the perfect number. It represented wholeness – twelve tribes of Israel, twelve apostles, etc. Twelve multiplied twelve thousand times equals one hundred forty-four thousand. Thus, the reference in Revelation means so much more than a mere number or quantity; it means the wholeness of God’s creation twelve thousand times over – the complete and perfect wholeness of “Wholeness.” This is who receives the seal as God’s servants: all who are part of the wholeness of God, all who live in the completeness of God’s infinite love.

Looking outwardly, this is about our oneness and wholeness with Creator and creation. Looking inwardly, it is about being whole, about having a deep, rooted spiritual practice that aligns mind, body and soul so we live in peaceful unity. So much of the conflict in our homes, communities and world is the inevitable projection of the conflicts we carry within ourselves. When the soul yearns to love but the heart doesn’t follow, when faith calls us to generosity but ego calls us to self-interest, we live with internal conflict. We cannot fully enter into the Wholeness of God until we find wholeness within. Such is the pilgrim’s quest; such is the spiritual path.

Much current psychology, holistic medicine and even many forms of new age spirituality speak of wholeness of mind, body and spirit as though it is some sort of enlightened discovery. Balderdash! It has been at the center of Christian spiritual practice since the very beginning. It is expressed in our sign of the cross; it is shared in Holy Communion. Many parts, one body. Wholeness.