Pope Francis has declared 2016 a special HOLY YEAR OF MERCY. In solidarity with this year of forgiveness and mercy, we have symbolically made the center doors of our Church “holy doors.” They are decorated and closed and will stay closed until December 8 when the Pope opens the doors to begin the Holy Year of Mercy. 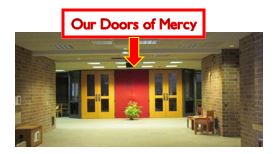 All the four papal basilicas in Rome have what is known as a holy door. These doors are normally shut from the inside and cannot be easily opened; they are only opened during Jubilee years. Upon entering St. Peter’s Basilica, the last door to the right is the Holy Door. The door is bricked up on the inside. On the first day of the Holy Year (Jubilee Year), the pope strikes the brick wall with a hammer and then opens the door to let in the pilgrims who come to make the most of the indulgence. Once again, it is the pope himself who closes the door at the end of the Jubilee Year. The tradition of the opening and closing of the Holy Door can be traced back as far as the 15th Century.

According to the Roman Catholic Church, the Holy Door represents Jesus, the Good Shepherd and the gate of the sheep pen. The bible says in John 10:9 that “I am the gate. Whoever enters through me, will be safe. He will go in and out, and find pasture.” The Jubilee Year is celebrated every 25 years, meaning that the Holy Door is opened every 25 years. The Holy Door of St. Peter’s Basilica was last opened by Pope John Paul II on December 24, 1999, when he simplified the ceremony for the Jubilee Year in 2000. 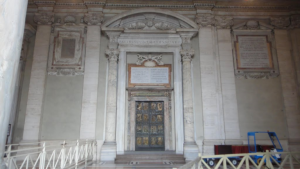 Other churches besides St. Peter’s Basilica which have a Holy Door include: St. John Lateran, St. Mary Major, Basilica of Saint Paul Outside the Walls, and Cathedral of Santiago de Compostela.

The Holy door was cast in bronze by Vico Consorti in 1950. Before that, the Holy Door used to be wooden. The Holy Door is 12 ft. by 7½ ft. This “Holy Door” is also known as “Door of the Great Pardon.” The door’s panels portray scenes of man’s sin and his redemption through the mercy of God:

The Holy Door symbolizes redemption of man’s sins and starting a new life. Definitely a door that remains closed for more than 20 years is not an ordinary door.