My maternal grandfather was a simple man.  He was an only child.  Grandpa had a high school education, worked in a factory most of his life and had a small farm. He and my grandmother raised animals and food which provided them with most of what they needed.  Their faith was strong and unfailing.  I don’t recall them ever missing church on Sunday.

The thing I loved most about my grandfather was his wonderful heart. He was patient, kind and funny.  He was an avid reader and was curious about many things.  My father died when I was young, so grandpa became the male role model in my life. I do not remember him ever using the word “hate” in regard to anyone.  He loved to talk politics but always stuck to the issues.  He had one issue that he would not budge on and it was abortion.  And even though he listened to the views of others and did not disregard their thoughts or ideas, he told me he would never vote for someone who supported abortion.  It was his bottom line.  Grandpa died when I was 30 of a massive heart attack.  He worked in the garden that morning, came in for lunch and fell on the kitchen floor, dying minutes later. As hard as it was to accept, it was a fitting way for him to die.  No one ever had to take away his car keys or convince him to live with assistance.  He lived as he died…simply without much fanfare. 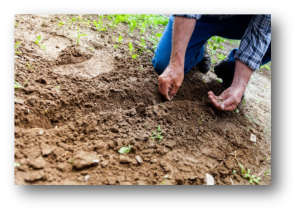 I think about my grandpa often and the word that most describes him is benevolent.  He had sins and faults like anyone else (he could be stubborn and not too ambitious), but more often than not, I remember his tenderness and love of people.  He was generous with what he had and was kind and giving to family, neighbors and strangers alike.  He was a man of peace and decency.  He told great stories. I think he believed the best about others rather than looking at their offenses and it offered him a life of hope and contentment.  I am pretty sure he knew he was not in charge and that he could put his trust in God.  I know my grandpa loved me very much and I thank God that he was in my life.

For me, grandpa’s spirit lives on in the grandchildren that were privileged to know him.

I will always be grateful for the blessing my grandfather was to me.  He taught me through his own words and actions to consider my own words and actions.  He, along with my parents, taught me through his example to be a good listener, to speak kindly of others, to be able to disagree without being petty, childish or disagreeable, to not hold a grudge or be unforgiving.  He also taught me that my opinion is not the only one but it is ok to stand up for my own convictions.

Jesus calls each of us to follow him, to be like him and to bring others to him.  When we live in joy and hope not giving in to anger, fear and despair, we can become servants to each other, here on this earth, able to do what Christ wants and calls us to do.  When we are able to do this, we trust in God and not in ourselves for the answers.  God often shows us the way through the people he gives us to love.