My first full day in Rome was an exciting day of experimentation. On Monday evening, I went to dinner with four of the Green Bay seminarians who are studying at the North American College.  A great evening; four fine young men indeed.  If they persevere to ordination, they will be a great asset to the diocese.

Tuesday morning I took a long ride to the Rome train depot, found two new classmates who recognized me because I wore my Packer cap.  We then navigated the purchase of a ticket to Pompeii. We missed our designated train, but with some negotiating we were able to take a later train. The super transit traveled at 160 miles an hour from Rome to Naples! We got there in one hour and then transferred to a rickety train that took us to Pompeii. An Italian gave us a two-hour guided tour through the ruins caused by the Vesuvius eruption in 79 A.D.  After the tour, we came back to Rome and I enjoyed returning to my room for a good night’s sleep. 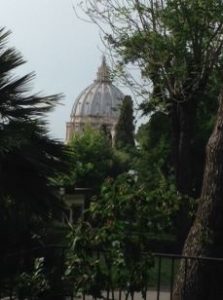 One of my first glances at the Vatican in Rome as seen through
the trees of the North American College.

Wednesday morning I ventured alone to walk from the North American College to the Vatican. With the help of a seminarian from Chad, whom I met on the street, I negotiated a tunnel, climbed stairs and found myself at the far side of the Vatican square. I soon realized that it was Wednesday morning – – the usual day for the Holy Father’s audience in the Square. There were probably 80,000+ people there, but by entering from the side, I was only about a football field away from him – – much closer than over half the people. The Gospel was being read in English as I entered and soon Pope Francis gave a reflection, in Italian, about the man Jesus healed from Jericho.  He spoke of the relationship between the man who is ill and discipleship. He often left his prepared text to speak spontaneously to us.  I could watch him from a remote TV screen very near me. 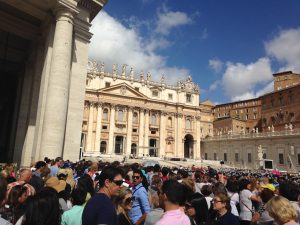 I was most moved when the Holy Father said he would pray for all of our family and loved ones, especially those who are ill. As we all prayed the Our Father together in Latin and he gave us his blessing, I remembered all of you and your many intentions. It was a very prayerful morning.