Eucharistic Adoration is a centuries-old devotion that, like many devotions in the Church, developed gradually.

In the early Christian community, consecrated bread would be brought home and given to those unable to be present at the liturgy due to illness.

In the 4th century, monasteries began to reserve the Eucharist for daily use and by the 11th century, reserving the Eucharist became a regular practice of Churches….still mainly to be brought to the sick and dying.

Also around the 11th century, the devotion to the Eucharist burst forth with people paying visits to churches to pray in front of tabernacles.  Eventually, a blessing with the exposed Eucharist, or benediction, developed and this has since evolved into the Eucharistic Adoration service that Catholics celebrate today. 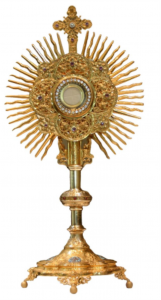 Parishes throughout the world, like our own, have a Eucharistic Holy Hour and many of the faithful often add this devotion to their Lenten prayer journey.

Source and excerpts from: www.uscatholic.org.