The year 2014 was a very difficult one for our family.  Within a six-month period, we experienced three deaths.   My brother, David, died sooner than expected from cancer.  He had just turned 71.  My brother-in-law, Doug, died suddenly from either a heart attack or aneurysm at the age of 59.   My other brother-in-law, John, suffered a heart attack and also died suddenly.  He was 75.  Gathering as family the third time, we were numb.  We couldn’t believe three of our family were gone so suddenly and so close together.  We were also a little afraid of what might happen next.

A number of things sustained us and helped us wander through those months.  First of all, we had each other.  Whatever busyness had kept us away from other family gatherings was put on hold as we came together to cry, tell stories, laugh and hold one another up.  Secondly, our loved ones had faith.  They knew Jesus Christ and it showed in the ways they lived their lives as good and decent people, always ready to lend a hand to others.  They lived and died “right” with God.  Lastly, we believe in the communion of saints.  We know beyond doubt that everyone who dies is still a part of our lives.  As our funeral ritual states,

“We believe that all the ties of friendship and affection which knit us as one throughout life do not unravel with death. For those who believe in your love, death is not the end.”

Hard as it was to let them go, we knew their presence was still with us, until we saw them again. 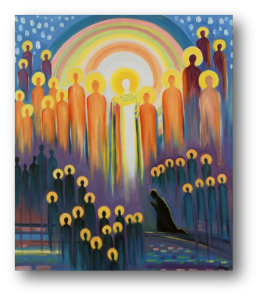 I remember vividly flying out for David’s funeral.  My trip had already been planned.  It was going to be my final time of seeing my brother and having one last face-to-face conversation with him.  He knew how I felt about him, but I wanted to tell him in person and to hear his deep, rich voice as we spoke.  He died the day of my flight.  Sitting in the plane, I sobbed.  I was angry at God for not waiting a few hours for me to arrive.  I was frustrated with myself for not taking the trip sooner. I hurt for my sister-in-law and for David’s children and grandchildren.  As the plane ascended, I looked out the window to see an orange glowing sky above the blackened, flashing storm clouds.  It suddenly occurred to me that I was flying through the same heavens where my brother now lived.  I knew it was not too late to have my conversation with him, and so I spent the flight talking to him.  I ended by asking David if, when he was ready, he would have his side of the conversation with me.  He did a few weeks later in a dream.   I thanked both David and God.  This, friends, is the communion of saints.

Each time we recite our Creed, our faith belief, we acknowledge the communion of saints.  We hold fast to God’s promise that we remain a part of one another’s lives.  Hopefully, we hold fast to that belief and allow it to comfort and strengthen us when we say goodbye.

At our annual Memorial Mass in the fall, we process in with our Memory Candles, each with the name of a loved one who died since last year’s All Saints Day.  We do so singing, “Jesus, remember them when they come into your kingdom.”  Let us take comfort in knowing that our loved ones have now entered the realm of the communion of saints.