The Church’s Christmas Season continues with the Solemnity of Mary, the Mother of God, which is celebrated on January 1 – the Octave of Christmas. This Feast is a celebration of Mary’s motherhood of Jesus. The honoring of Mary can be traced back to the Council of Ephesus in 431. During the 13th Century, the Feast of Circumcision of Christ came to replace the Feast honoring Mary. Then in later years, it was changed back to honoring Mary. It was in 1974 that Pope Paul VI removed the Feast of Circumcision of Christ from the Liturgical calendar and replaced it with the Feast of the Solemnity of Mary, Mother of God, celebrated on the first of the New Year. We honor Mary as the “Queen of Peace.” New Year’s Day is designated as World Day of Peace acknowledging the role Mary has in the hearts of the world. 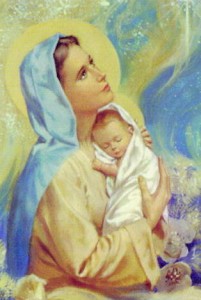 The season continues with the Epiphany which is the manifestation of Jesus as Messiah of Israel and Savior of the World. The word Epiphany means “showing forth.” The Church recognizes the Epiphany as the time when the Three Wise Men, the Magi, traveled a distance following the Star of David to find the infant Jesus lying in a manger. The Three Wise Men gave him homage with gifts of gold, frankincense, and myrrh. The gold represented that Jesus was worthy of the highest honor. Frankincense is a sweet smelling incense which represented holiness. Myrrh was the symbol of preserving and saving: Jesus came to save all of us. 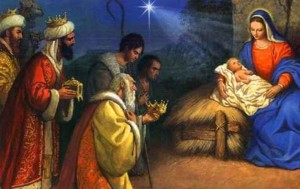 We then end the Christmas season with The Baptism of our Lord. Jesus is baptized by John the Baptist in the Jordan River. When Jesus was baptized, the Holy Spirit came down in the form of a dove with a voice proclaiming that Jesus was His Beloved Son. Jesus’s Baptism was part of an acceptance and inauguration of His mission as God’s suffering servant. Jesus allowed Himself to be among sinners. He would be the source of the Spirit for all mankind. The Baptism of Jesus opened the doors of heaven, which were closed when Adam and Eve had sinned. The waters became sanctified by the Spirit, and the prelude of new creation. What do we see when we witness someone being baptized?

Written by Linda B., parishioner