Daffodils are a sign of spring, and according to the calendar, spring arrived on Palm Sunday, March 20th. There were enough warm days in March for the daffodils in our backyard to be the first signs of new life after a long winter. In fact, I was thinking that they might bloom in time for our family get-together on Easter Sunday. But that was not meant to be. Instead, on Easter morning, the yellow blossoms of our daffodils were covered with snow!

After Easter, the snow melted, and the bright yellow flowers finally appeared with each flower silently announcing, “He is risen!” But before long, more snow and another cold spell arrived with temperatures that bottomed out in the mid-teens. I was concerned that our newly blossoming daffodils would not make it through the extreme cold, but they did… Alleluia! 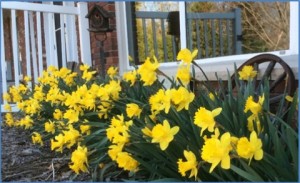 The resilience of the daffodils reminds me of the stories we continue to hear during this Easter season from the Acts of the Apostles. Just as the early church was gaining converts and momentum, the authorities did their best to silence those who were proclaiming the Good News of Jesus.

Just as the disciples in the 1st century had their challenges and hardships, two thousand years later, we continue to face many obstacles in the 21st century when we speak the name of Jesus. But, with God on our side, light overcomes darkness, and hope overcomes despair. When we truly love one another, as we’re called to do, the warmth of God’s love can melt the coldness of hearts who need to hear the Good News.

After two weeks of warm weather, maybe we’ve seen the last of the freezing temperatures until later this year. Let’s hope so! I’m not sure if our crocuses are as resilient as the daffodils. 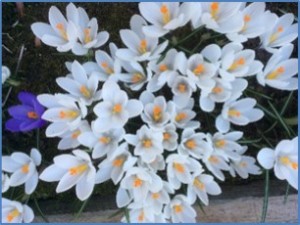 Regardless of the weather, may God be with us as we spread the warmth of his great love to our fellow brothers and sisters in Christ.

Many blessings to you and your family!
Deacon Mark