Last week I was on a business trip. As the plane landed at St. Louis International Airport, I realized that I was less than five miles from the heart of Ferguson, Missouri, the site of great civil unrest and violence following the fatal shooting of Michael Brown on August 9, 2014. I learned from our taxi driver that the violence continues. In the past two months, the St. Louis area has had 1-2 murders per day (apparently, not enough to make the news). Events such as those that occurred in Ferguson helped give rise to the Twitter campaign of #BlackLivesMatter.

Recently, in our neighborhood, we’ve noticed that some people are using blue light bulbs in their porch lights. I learned that this is being done to show support of the men and women in blue who work hard to keep our neighborhoods safe. This movement now has a Twitter campaign of #BlueLivesMatter. 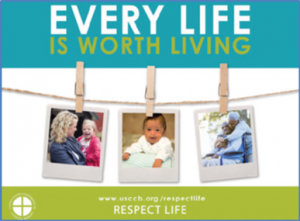 October is Respect Life Month. We take pause to remember that human life begins at conception and ends with natural death. We remember that we are all sons and daughters of the living God, who made us in his own image. We pray that every human life will be treated with respect and dignity. Every life is worth living. The message is simple and timeless. At the end of wandering for 40 years in the desert, Moses said this to the Israelites.

“I have set before you life and death, the blessing and the curse. Choose life, then, that you and your descendants may live, by loving the LORD, your God, obeying his voice, and holding fast to him.” ~Deut 30:19

This seemingly simple choice has been clouded in our culture. What about the child in the womb from an unplanned pregnancy? What about the murderer on death row? Or, what about the elderly person who requests an assisted suicide? What about a blue life, or a black life, or any other color life?

As Catholics, we’re called to choose life in all colors, and all forms, at all stages. We’re called to embrace the simplicity of the fifth commandment… thou shall not kill. When we believe there should be an exception, we’d be wise to dig deeper, to do more research, to pray, and to reflect. We should take time to ask ourselves, “What Would Jesus Do?” How would Jesus think about this exception that is believed to be warranted?

I’ve never sent a tweet, but I’ve been thinking we should start a new Twitter campaign with #AllLivesMatter! What would Jesus do? He might suggest #AllSoulsMatter! And they do.

Many blessings to you and your family,
Deacon Mark Mullins