Advent is a time rich in family traditions. Many of them have been so effectively absorbed into our culture that their religious origins are hidden.

Some of us will set candles in our windows. That custom began in Ireland during the “penal” days extending from 1691 to the “Catholic Emancipation” in 1829 and beyond. There were harsh penalties and fines for not attending the government church. Priests were forced into hiding, but people were resourceful and determined in guarding their faith. At Christmas, they, particularly in the countryside, placed a lighted candle in the window and left the door unlocked hoping that a priest might come by and celebrate the Christmas Mass for them. The custom of the Irish window candle was so admired in Catholic Europe that it was widely copied there, and now finds a welcome in households that may not exactly expect a priest to wander in! 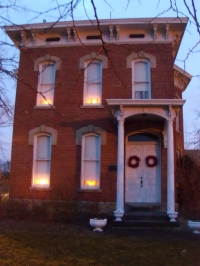 Many churches decorate with trees. The “roots” of this custom are in liturgical drama: religious plays performed in the churches and town squares of medieval Europe. The favorite theme for this time of year was the “Paradise Play,” a dramatic history of the human race from the Garden of Eden to the birth of Jesus in Bethlehem. The language and music varied from place to place, but one feature was always in place: a great tree decorated with apples. As a prop, it provided lots of material for the actors: the temptation, shelter for the manger, and a reminder of the wood of the cross. Soon people began to bring “paradise trees” into their homes, decorating them with gifts and lighted candles. 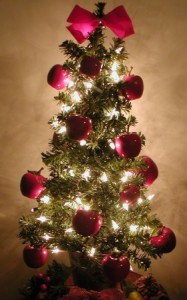 Many Germans give credit to Martin Luther for transforming the “Paradise Tree” into the evergreen Christmas tree. Walking home on a starry Advent night, he was so awed by the beauty of the night that he hauled a pine tree inside and decorated it with lighted candles. Americans were holdouts. It took until 1856 for the Commonwealth of Massachusetts to decriminalize Christmas decorations, the old Puritan dislikes falling before the waves of Irish and German immigrants with traditions firmly in hand!