Brothers and Sisters in Christ,

Several years ago, I worked for a company in Greenville, which meant a 35-minute commute on Hwy 41 from our home in Ashwaubenon.  Twice a day I drove past Gillette Street on the north side of Appleton.  As I approached that area each morning, I would make the sign of the cross and say a short prayer when I saw the small building at the northeast corner of that intersection.  Why?  Because it was a Planned Parenthood facility.  In 2014, this “Appleton North Health Clinic” performed almost 600 abortions.

On many mornings, I would see a man sitting or walking in front of that building.  One day, I decided to take the Hwy 47 exit so I could introduce myself and meet that stranger.  That’s the day I met Duane.  I learned that his normal weekday schedule included attending Mass and spending several hours in front of Planned Parenthood trying to “save babies and change hearts”.  His ‘supplies’ included a variety of pamphlets, a rosary, and holy water.  He spent most of his time there in prayer.  He told me that he had been praying there for many years and that he planned to keep coming until the facility was closed.

According to a recent article in The Compass, that facility stopped performing abortions in the fall of 2015.  In late August of this year, it was announced that Planned Parenthood of Wisconsin is permanently closing this facility.  When I saw this news, I thought of Duane…his prayers, along with countless prayers of many others, were answered.

October is Respect Life Month which includes the “40 DAYS FOR LIFE” campaign.  People from 23 countries and all 50 states are praying and fasting for a greater respect of all life, from conception to natural death, and an end to abortion.  The most recent S.E.A.S. Newsletter includes an invitation to join fellow parishioners in peacefully praying outside of Planned Parenthood on 2605 S. Oneida Street in Ashwaubenon.  Your prayers and support will be appreciated! 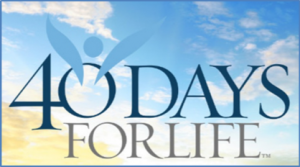 We should never underestimate the power of prayer and fasting.  Jesus hears our prayers, just as he heard the cries of the ten lepers as he was entering a village in today’s Gospel.  Sometimes prayers are answered quickly, while other prayers may be answered in many years, or answered in ways we don’t expect.  And when our prayers are answered, we need to remember to give thanks to God.  (Only one of the ten lepers took the time to return to Jesus to say thank you.)  May our prayers always include thanks and glory to God, so that Jesus might say to us, “Stand up and go; your faith has saved you.”

Many blessings to you and your family.